Justin Bieber has revealed that he owns a couple of personal Hyperbaric Oxygen Chambers (one at home and the other one at his studio) that, according to his testimony, is doing wonders for the treatment of several of the medical conditions he’s suffering from.

“It fills up with oxygen, I really have been struggling with a lot of anxiety. You get more oxygen to your brain so it decreases your stress levels. It’s pretty cool.”, he assures in the “The Dark Season” video, where he shares details on his history with drugs, and how he deals with his physical and mental health after being diagnosed with Lyme disease.

Bieber also gets IV infusions that help his body to get rid of toxins accumulated after several years of drug abuse: “I’ve abused my body in the past and now I’m just in the recovery process trying to make sure I’m taking care of my body and taking care of the vessel that God’s given me.”

The Hyperbaric Chambers Justin is using are known as Soft-Sided or Mild HBOT (mHBOT) Chambers. These chambers are portable and are closed with a zipper. In the video we can see how Bieber uses the mHBOT sealed with a zipper which was secured from the outside by his wife. The difference between Hard and Soft Hyperbaric Oxygen Therapy Chambers is that the former can deliver 100 percent oxygen at atmospheric pressures above 2.0 ATA, while mHBOT can reach pressure levels of around 1.3 ATA and usually deliver about 24 percent oxygen levels. 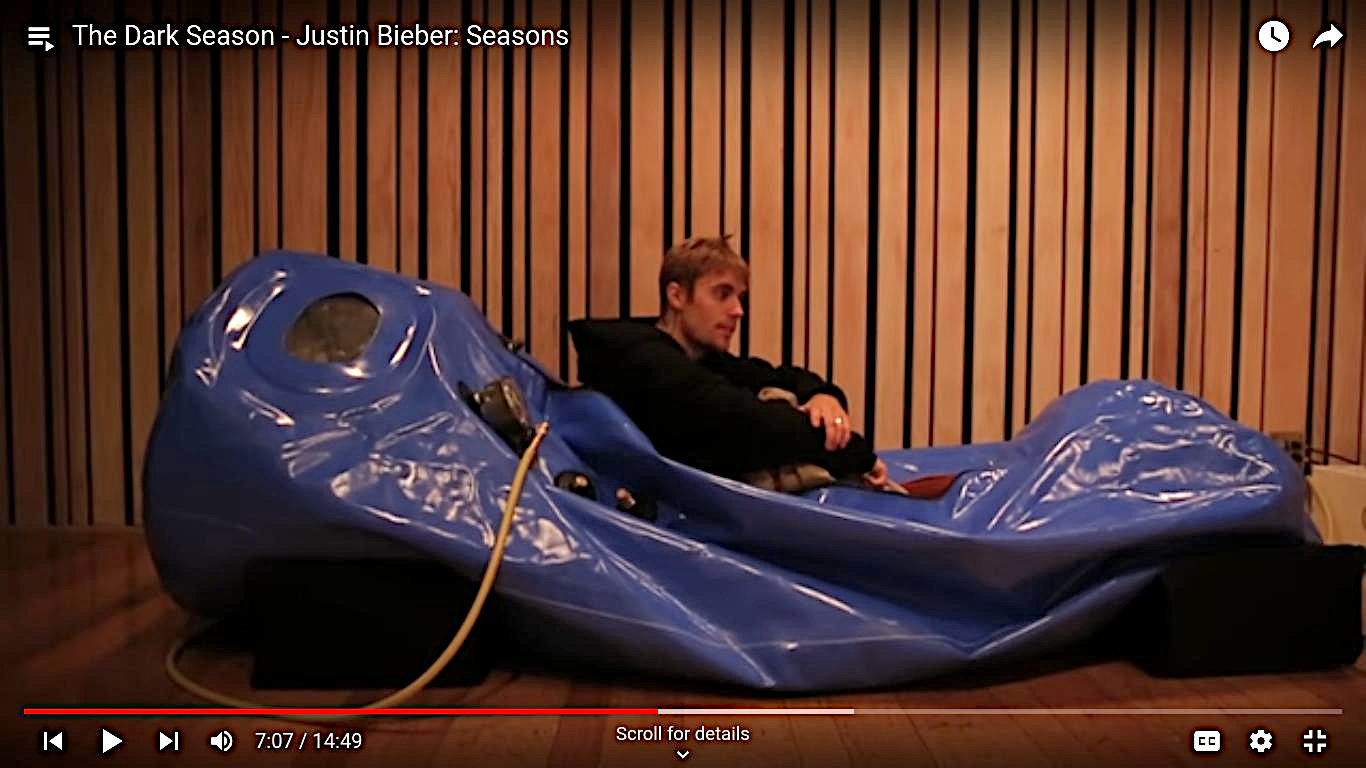 Hyperbaric Oxygen Therapy (HBOT) involves breathing oxygen in a pressurized chamber in which the atmospheric pressure is raised up to three times higher than normal. HBOT can be used as a primary treatment or as an adjuvant to surgical and/or pharmacologic interventions.

Henry’s Law says that the amount of molecular oxygen (O2) dissolved in a solution (blood and/or tissue) is directly proportional to its partial pressure. Using hyperbaric conditions greatly increases the amount of oxygen available. For example, at sea level, the plasma oxygen concentration is 3 mL/L. If you increase the pressure to 3 atmospheres, dissolved oxygen approaches 60 ml/L of O2. This is approximately the amount of O2 needed to supply the resting oxygen requirement of many tissues, even without the contribution of oxygen carried by hemoglobin.

The Undersea & Hyperbaric Medical Society (UHMS) defines hyperbaric oxygen as “an intervention in which an individual breathes near 100% oxygen intermittently while inside a hyperbaric chamber that is pressurized to greater than sea level pressure (1 atmosphere absolute, or ATA). For clinical purposes, the pressure must equal or exceed 1.4 ATA while breathing near 100% oxygen.”

HBOT is given in two settings: monoplace or multiplace. A monoplace chamber holds a single patient and the entire chamber is pressurized with 100% oxygen. The patient directly breathes the chamber oxygen. This type of chamber is most appropriate for clinically stable patients with chronic medical conditions. A multiplace chamber can hold two or more people. It is pressurized with compressed air while patients breathe 100% oxygen via masks, head hoods, or endotracheal tubes. This allows closer monitoring of critically ill patients.

After a review of the available scientific evidence, the Undersea & Hyperbaric Medical Society published the document Hyperbaric Oxygen Therapy Recommendations (13th Edition) with 14 documented indications for HBOT. They include:

1. Air or gas embolism (a blood vessel blockage caused by one or more bubbles of air or other gas in the circulatory system)

4. Acute Traumatic Ischemias (when traumatic injury to an extremity produces partial or total occlusion of a vessel from compression, shearing, or laceration)

5. Decompression sickness (a medical condition caused by dissolved gases emerging from solution as bubbles inside the body tissues during decompression)

7. Hyperanemia (a severe form of anemia, in which the hematocrit is below 10%)

8. Cerebral abscess (an abscess caused by inflammation and collection of infected material within the brain tissue)

9. Necrotizing fasciitis (a bacterial infection that results in the death of parts of the body’s soft tissue)

11. Delayed radiation injury with soft tissue and bony necrosis (caused by being exposed to high amounts of ionizing radiation, in a short period of time)

14. Idiopathic sudden sensorineural hearing loss (whose root cause lies in the inner ear, sensory organ or the cranial nerve VIII)

HBOT can also be used as adjuvant therapy in the treatment of several disorders. A review by Leach et al. lists some of the cellular and biochemical benefits of hyperbaric oxygen:

HBOT increases the amount of oxygen in the body by double within an hour, and there’s no such thing as an overdose of oxygen using this therapy, so it wouldn’t be harmful to sleep during the night inside an Hyperbaric Oxygen Chamber. However, after about two hours the body would become saturated and there would be no real additional medical benefit.

The only absolute contraindication to HBOT is untreated pneumothorax. Relative contraindications include obstructive lung disease (increased oxygen may decrease respiratory drive in these patients), sinus infection or recent ear or thoracic surgery.

You can find out more about which cookies we're using, or switch them off at settings.

This website uses cookies so that we can provide you with the best user experience possible. Cookie information is stored in your browser and performs functions such as recognising you when you return to our website and helping our team to understand which sections of the website you find most interesting and useful.

Strictly Necessary Cookies should be enabled at all times so that we can save your preferences for cookie settings.

If you disable this cookie, we will not be able to save your preferences. This means that every time you visit this website you will need to enable or disable cookies again.